Consumer spending in mobile apps hit a record $64.9 billion during the first half of 2021, according to preliminary data from app store intelligence firm Sensor Tower. This figure represents a 24.8% increase in spending seen across both the App Store and Google Play, compared with the year-ago period. But while industry experts believe the accelerated shift to mobile fueled by the pandemic is a trend that will continue, it’s worth noting that — despite the new record — the growth rate for consumer spending has slightly slowed, and the download growth slowed more dramatically. 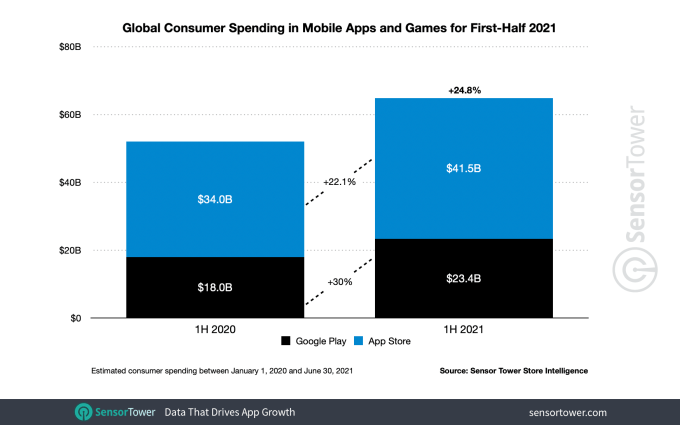 Apple’s App Store accounted for $41.5 billion in global consumer spending during the first half of 2021, or 1.8x the $23.4 billion seen by Google Play.

However, Google Play continues to outpace on growth, having jumped 30% from the $18 billion in the first half of 2020 compared with the 22.1% growth from the $34 billion the App Store had seen. This is due, in part, to demand from markets like the Philippines, where the Covid-19 pandemic has forced business closures and quarantines, Sensor Tower noted.

Consumer spend outside of games was driven by sports, finance, business, book and entertainment apps. Subscription-based apps in the top 100 apps (excluding games) were a large part of this spend, too, contributing $8.3 billion during the period. TikTok remained a top grossing app during the first half of 2021, followed by YouTube and regular top earner Tinder. 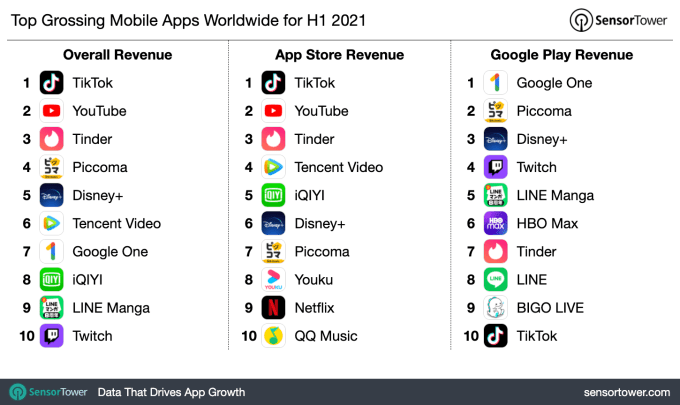 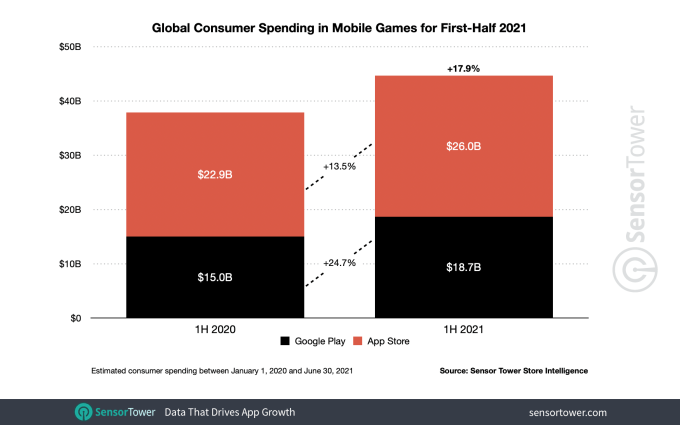 Top grossing games in the first half of 2021 were, in order, Tencent’s Honor of Kings ($15B+), PUBG Mobile (including its localized version for China, reached nearly $1.5B), Genshin Impact ($848M+), Roblox and Coin Master.

Mobile app download growth also significantly slowed in the first half of this year, the firm found.

Last year, the Covid-19 pandemic contributed to a surge of new mobile app installs around the world, as consumer looked to apps for work, school, shopping, heath, grocery, and more. During the first half of 2020, app installs had jumped 25.7% year-over-year to reach 71.3 billion downloads. But in the first half of 2021, downloads only grew 1.7% to reach 72.5 billion installs. 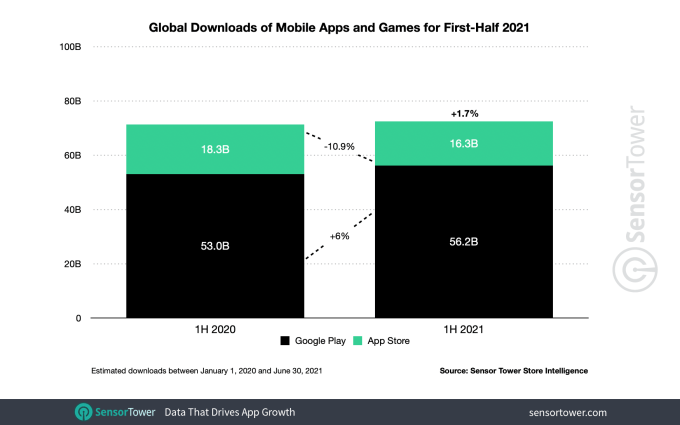 The App Store even saw a year-over-year decline in non-game installs in the first half of 2021, dropping 10.9% to 16.3 billion from 18.3 billion in the first half of 2020. Sensor Tower believes this is reflective of the increased competition for consumer attention in markets with a high number of iOS users, like the U.S., where businesses have been reopening and in-person activities are resuming. 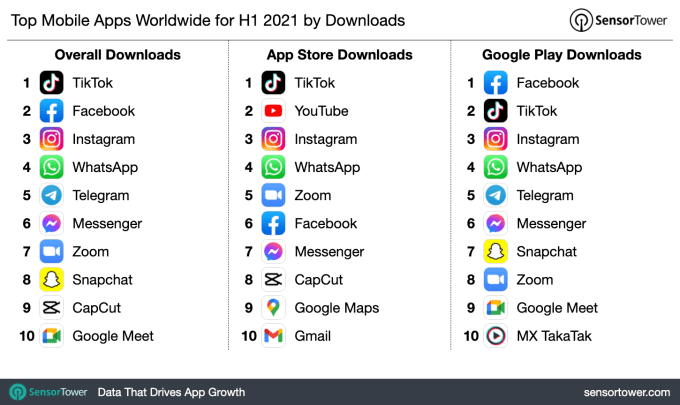 The (non-game) app with the most downloads was TikTok, which gained 384.6 million new installs during the first half of this year. But this is down by around 38% from the 619 million installs it saw during the year-ago period — a change that can be attributed to its ban from the Indian market last year. The rest of the top 5 most-downloaded app chart was dominated by Facebook, which scored the No. 2, No. 3, and No 4 positions, with Facebook, Instagram and WhatsApp, respectively. Telegram was No. 5 followed by Messenger, Zoom, Snapchat, CapCut and Google Meet.

The app data presented is a preliminary analysis that may become more precise over time. It’s also worth comparing it to related reports from other firms for a fuller picture.