Literati has raised a $40 million Series B to pursue an unusual startup opportunity — namely, book clubs.

Founder and CEO Jessica Ewing (a former product manager at Google) explained that the Austin-based company started out with book clubs for kids, before launching its Luminary brand for adult book clubs last year. And the Luminary clubs live up to the name — they’re curated by notable figures such as activist and Nobel laureate Malala Yousafzai, NBA star Stephen Curry, entrepreneur and philanthropist Sir Richard Branson, journalist Susan Orlean and the Joseph Campbell Foudnation.

When you sign up for a Literati book club, you receive a print edition of each month’s selection with a note from the curator. You also get access to the Literati app, where you can discuss the book with other readers, and where curators host author conversations. For example, Curry is leading a book club focused on nonfiction about people who “transcend expectations” (he invested in Literati as well), while Yousafzai chooses books by women “with bold ideas from around the world.”

Ewing told me that she’s trying to build the first “new, innovative bookseller” since Amazon launched 25 years ago. And she’s doing that by focusing on curation.

“There’s too much choice, too many lists, it’s completely overwhelming for most people,” she said. And she argued that it helps to enlist celebrities and other big names to do the curation: “Books are aspirational. No one aspires to play more video games, people aspire to read more … People want their books to be recommended by someone a little bit smarter than they are.” 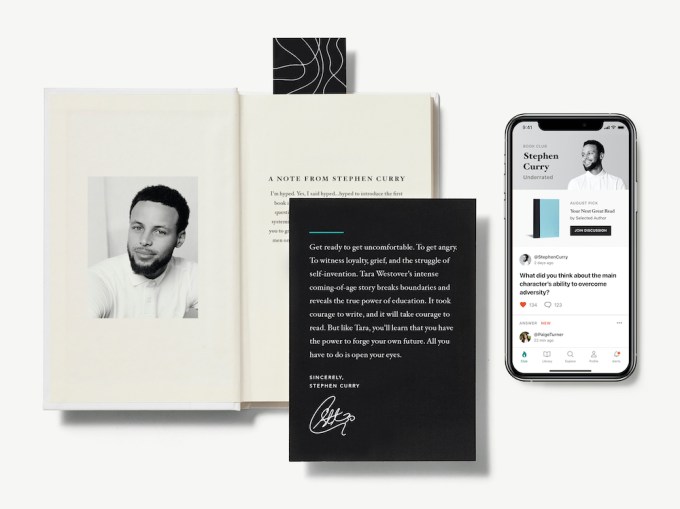 Ewing’s hope for Literati is to create “the next great literary social network,” bridging the gap between celebrity-driven lists like Oprah’s Book Club and Reese’s Book Club and what she described as “the wine-and-cheese, super intimate model.”

“I would love to see in-person meetups once we’re out of the COVID environment,” she added. “But I also think there’s everything in between. We’re enabling threaded discussions [in the app] right now, and it’s cool to have asynchronous conversations about the books.”

And on the children’s book side, Literati is also working building personalization tools designed to recommend the best books for each child.

“To me, this is one of the most exciting applications: How do we make this generation of kids love reading by pairing them with the right books?” Ewing said.

Literati previously raised $12 million in funding from Shasta Ventures and others, according to Crunchbase. The new round was led by Aydin Senkut of Felicis Ventures, with participation from Dick Costolo and Adam Bain of 01 Advisors, Founders Fund, General Catalyst, Shasta, Silverton Partners, Springdale Ventures and — as previously mentioned — Stephen Curry.

“I wanted to start my own book club with Literati, because their mission to better the world through reading naturally aligns with my values as an entrepreneur and father,” Curry said in a statement. “I was a fan before I was an investor, and am so proud to be a part of a company that works to better the lives of others, one book at a time.”

Gift Guide: The best books for 2020 recommended by VCs and TechCrunch writers (Part 1)